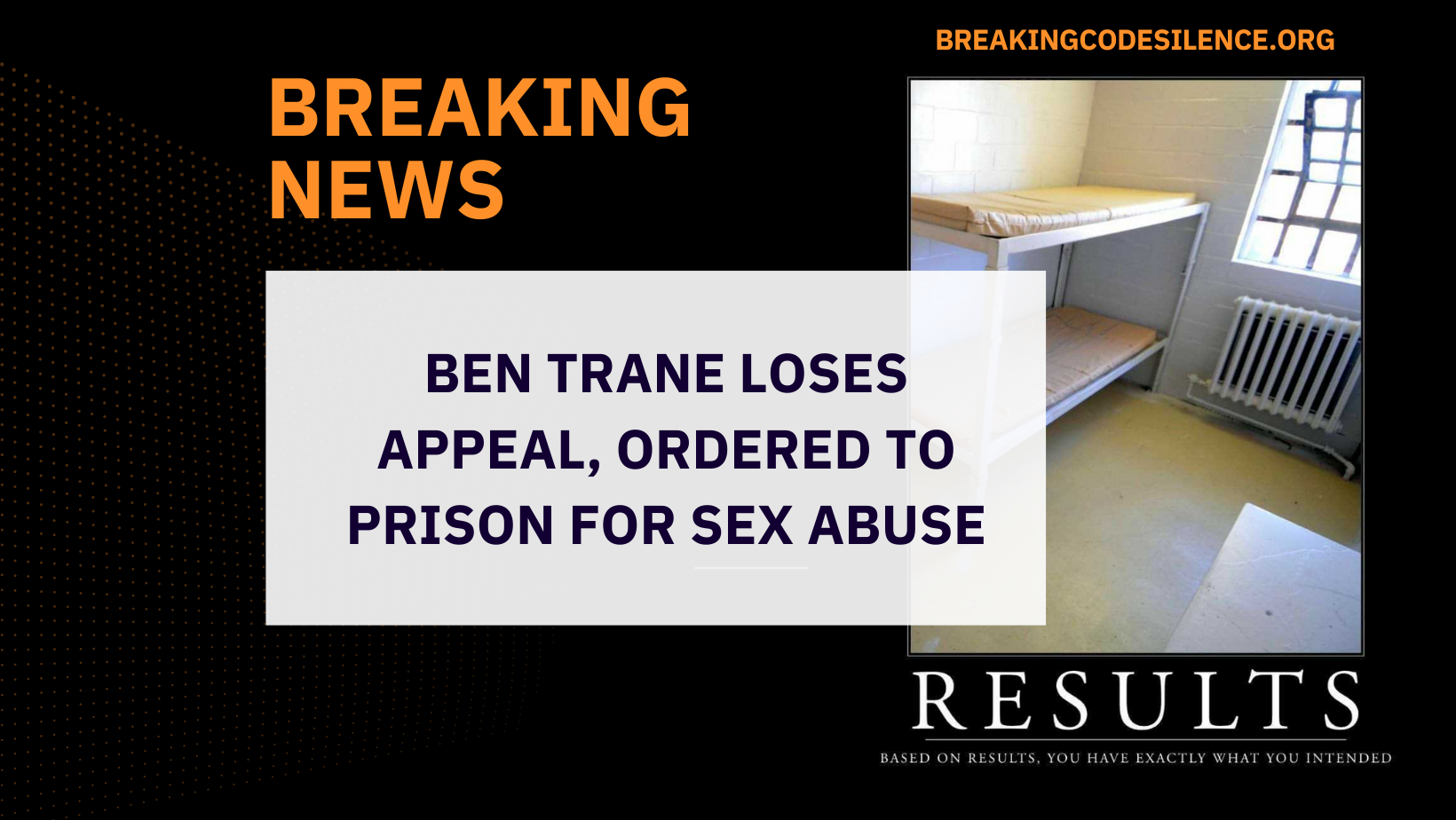 On August 13, Judge Mark Kruse entered an order indicating the conviction of Ben Trane stands and ordering Trane to report to the Lee County, Iowa, jail within 30 days. Judge Kruse further ordered Trane to be transported to the Iowa Medical and Classification Center in Oakdale to serve his sentence as originally imposed. Trane appears to have requested a further appeal bond and has been denied, although the full order is not available at this time.

In September 2017, Trane was accused of abusing the children under his control when he was the owner and director of the now-shuttered Midwest Academy, a notorious “troubled teen program” located in Keokuk, Iowa. After the campus was raided, searched, and shut down by authorities in January 2016, Trane was eventually arrested and charged with several counts of sexual and physical abuse. Trane’s victims were minor children living full-time at the residential facility.

Midwest Academy was opened in 2003 by Trane and Brian Vaifanua, formerly the owner of another notorious teen program, Paradise Cove in the country of Samoa. After Paradise Cove shut down, Vaifanua sought property on which to open a new program in the U.S. and settled on Keokuk, Iowa. Trane took over Midwest entirely a few years later, running it with the assistance of his wife, Layani. Midwest was a for-profit program claiming to specialize in reforming so-called “troubled teens”, such those struggling with drugs and alcohol, performing poorly in school, or suffering from mental health issues. However, no due cause was required to place a child in the school, meaning the program would essentially accept any child whose parents were willing to pay. Reports of abuse were common throughout the facility’s roughly 13 years in operation.

Trane was accused by the prosecution of horrific and shocking abuse of his position of power, including raping at least one underage girl, forcing underage girls to undress in his presence and model underwear for him as he critiqued their bodies, taking underage girls shopping for underwear at the local Victoria’s Secret, and holding children in isolation rooms for days, far longer than the amount of time allowed by state law. The Des Moines Register conducted an investigation and, using public records requests, found that over 80 calls were made to the sheriff in 3 years in regards to Midwest Academy and of those 80 calls, 5 of those included sexual offense allegations.

At the trial, one victim testified that Trane had raped her between 7 and 10 times, including manual, oral, and vaginal rape. Other children testified to being forced to undress in front of Trane in a mirrored room for so-called “body positivity classes”. Others still recounted how they had been held in “seclusion rooms” for long periods of time, forced to hold “stress positions”, and denied food. Prosecutors also alleged investigators had found semen stains in front of CCTV monitor in Trane’s office, although the semen was apparently not able to be DNA tested. Pictures of sleeping girls were also found on Trane’s phone.

In December 2017, a jury convicted Trane of assault with intent to commit sexual abuse, sexual exploitation by a counselor or therapist, and child endangerment. Facing up to 9 years in prison, he was ultimately sentenced to that maximum in May 2018.Trane was also ordered to 10 additional years of supervised release and DNA profiling, required to register as a sex offender, and fined over $5,250 (the court waived another $2,700 of fines after Trane claimed to be indigent). Additionally, the court entered a 5-year no-contact order against Trane relating to his victim.

Trane appealed his conviction and won a small success in 2019, leading to fears from his victims he might win a new trial and ultimately walk free. The Iowa Supreme Court ruled that Judge Kruse had made an error during the trial and sent the case back to Judge Kruse for additional hearings related to the credibility of the victim. In Friday’s order, Judge Kruse appears to have determined the victim was credible and disposed of the issue. Further appeals from Trane may be forthcoming. However, the order appears to indicate any further appeals from Trane will be made from prison of necessity. Trane has reportedly been living in rural Idaho with family, and some fear he may attempt to flee custody.

Read more on Midwest Academy and Paradise Cove, as well as other facilities, in the Breaking Code Silence Archives:

Breaking Code Silence is a registered California nonprofit and 501(c)(3) tax-exempt charitable organization. We are staffed by volunteers and rely on donations to undertake our important work. If you share our mission and want to help, you may apply to volunteer or make a tax-deductible donation. You can also submit a tip about an abusive facility or dangerous situation here or join our support group for survivors here.

HAVE AN EVENT TO PROMOTE?